Just a bit of trivia history...

I found this neat old Burma Shave sign at an auction last week: 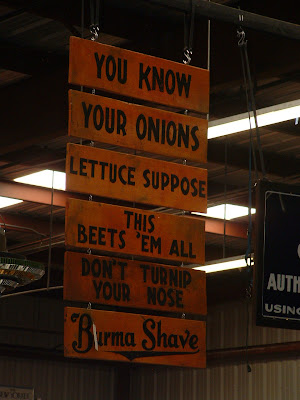 Burma-Shave was introduced in 1925 by the Burma-Vita company, owned by Clinton Odell. The company's original product was a liniment made of ingredients described as coming "from the Malay Peninsula and Burma."[1] Demand was sparse, and the company sought to expand sales by introducing a product with wider appeal.

The result was the famous Burma-Shave advertising sign program, and sales took off. At its peak, Burma-Shave was the second-highest selling brushless shaving cream in the United States. Sales declined in the 1950s, and in 1963 the company was sold to Phillip Morris. The signs were removed at that time. The brand decreased in visibility and eventually became the property of the American Safety Razor Company.

In 1997, the American Safety Razor Company reintroduced the Burma-Shave brand, including a nostalgic shaving soap and brush kit. In fact, the original Burma-Shave was a brushless shaving cream, and Burma-Shave's own roadside signs frequently ridiculed "Grandpa's old-fashioned shaving brush."

Posted by threesidesofcrazy at Friday, March 19, 2010

Email ThisBlogThis!Share to TwitterShare to FacebookShare to Pinterest
Labels: trivia

Hi Tami,
I liked this post, as it brought back memories. I would have been very young, but I think I do remember some of those Burma Shave road signs.

Hope all is well with you!

I don't remember them either, just my grandparents talking about them and thought they were neat!